This article was the second of a two-part blog, first published by the Huffington Post on March 2, 2017. 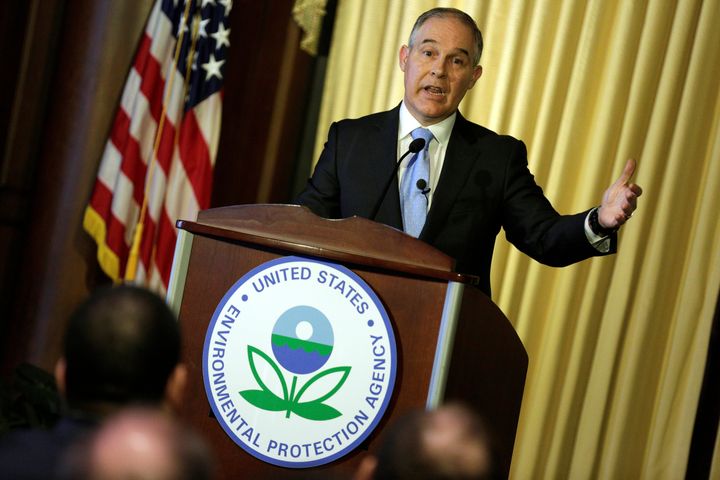 Note: This is Part II of a two-part analysis of President Trump’s war on the Environmental Protection Agency. Part I: Deception examines how Trump is trying to please a narrow audience of special interests and supporters while misleading the public at large. Part II: Deconstruction examines the five fronts of the war and how Trump will go about weakening the Agency.

While Trump reassures the public that he is protecting clean air and water, it will be EPA Administrator Scott Pruitt’s job to tear down EPA from within. He will have strong support from the iron triangle of industry lobbyists and their congressional allies. It is a practice Pruitt is familiar with from his days as Attorney General of Oklahoma, where he sued EPA 14 times to roll back clean air and clean water standards. He filed these lawsuits hand-in-hand with energy companies who stood to benefit and were simultaneously pouring campaign cash into Pruitt’s political campaigns.

Pruitt has wasted little time after his confirmation before stirring the pot, delivering a fiery speech to the crowd at the Conservative Political Action Conference (CPAC). “The future ain’t what it used to be at the EPA,” he said before promising to “rollback the regulatory state.” When asked how it felt to be at CPAC with “everyone hoping that the very agency you are running is going to go away?” Pruitt answered that “it’s justified.”

Pruitt’s remarks left no doubt that he was among those favored by Steve Bannon, Trump’s senior strategist. “if you look at the cabinet nominees,” Bannon told CPAC, “they were selected for a reason, and that is deconstruction” of regulation.

Pruitt will pursue their war of deception and deconstruction on five fronts: cutting EPA’s budget, relaxing environmental enforcement, rolling back pollution standards, putting politics before science, and surrendering to polluters in court. Each area of attack will have a cover-story to mislead the public.

Deep budget cuts at EPA are being portrayed as fixing budget issues. During his primary campaign, Trump pointed to EPA budget cuts to explain how he would pay for other priorities. Trump’s aides today use EPA to help explain where he will get the money to increase defense spending. In reality, EPA accounts for a mere two-tenths of one percent of federal spending. Any claim that major budget issues can be dealt with on the back of such a small sliver of the budget is false.

EPA’s budget is already 20 percent lower than it was in 2010, so any budget cuts would bite especially deep at EPA. Two-thirds of EPA’s budget is spent on protecting water and clean air. And EPA’s biggest expense is not its modest staff (which account for less than one-quarter of EPA’s budget), but rather its highly effective grants to states to help local communities clean their water and air.

When it comes to gutting EPA’s enforcement against polluters who illegally dump pollution into the water and air, leaked budget documents show that Trump has already directed EPA to curtail pollution-monitoring and get states “to assume more active enforcement roles.” But this isn’t about states’ rights. It is merely a convenient cover for gutting federal enforcement responsibility without any assurance that states will pick up the slack. In fact, In fact, Pruitt took Oklahoma in the opposite direction as Attorney General, shutting down the state’s environmental enforcement unit. Meanwhile, abandoning enforcement to states puts states at the mercy of neighboring states’ enforcement, and almost every state has communities that are downwind or downstream of polluters across state boundaries.

Rollbacks and weakening of federal clean air and water standards will come in many forms. Standards will be erased and weakened based on the rhetorical flourish of “job-crushing regulations.” However, increasing pollution does not grow the economy, any more than cutting EPA regulations will deliver Trump’s promises of cleaner air and water. Under the guise of ‘regulatory reform,’ new roadblocks will also be set up to stall clean air and clean water standards that are required by law.

When it comes to science, Pruitt is a ready partner to Trump in spreading misinformation to defend their denial of climate change. Political interference in science will come in many forms, but the most dangerous may be an effort to permanently meddle with EPA’s scientific capacity under the guise of “reforming” the scientific process, a top Trump transition goal, according to Ebell.

We can expect Pruitt and Attorney General Jeff Sessions to take up a new practice of surrendering to “sue and pollute” lawsuits in court, abandoning the legal defense of EPA rules against suits brought by some polluters who would rather fight in court than invest in clean technology. Pruitt may even take the unprecedented step of refusing to recuse himself from overseeing decisions on lawsuits that he himself brought against EPA when he was Oklahoma Attorney General – conveniently switching sides from plaintiff to defendant.

Fighting Back to Save EPA

The scale and scope of Trump’s war on EPA is alarming, and he and Pruitt have plenty of tools to do serious harm if left unchecked. But there is every reason to believe they will not prevail in the long run. The Clean Air Act, the Clean Water Act, and other bedrock environmental laws create boundaries enforceable in court that can thwart the worst excesses. Concerned Senators have the power to stop agency budget cuts and other attacks if they are steadfast in their resolve. And the dedicated, expert staff at EPA – who have worked diligently for Republican and Democratic administrations alike – can resist any efforts by the administration to put politics, ideology, and special interest lobbyists ahead of the law, science and public interest.

Most of all, Pruitt and Trump will have to contend with public opposition as they walk the tightrope between broad public support for EPA and serving the narrow interests of those who want to permanently weaken the agency. If we remain vigilant and demand accountability from our elected officials, we can make every step along that tightrope more strenuous than the last.

A data-driven look at state climate leadership and the cold, hard realities of climate math